What if Barcelona and Real Madrid were one? So often the question is posed – What if Barcelona and Real Madrid were one? Who would get in the final 11? It would be easy to just select Barca players throughout, seeing as how they are the current Spanish and European champions, but here is my take.

Goalkeeper – Iker Casillas: The undisputed Real Madrid and Spanish number one goalkeeper. Barcelona’s Victor Valdes is good, but Casillas gets the nod.

Right-back – Dani Alves: I’m not sure that there is a better attacking full-back in world football. At times he is more like a right-winger than a defender, but his impressive engine secures a place in the team.

Centre-back – Sergio Ramos: Sometimes considered a bit erratic, Ramos is not everybody’s favourite player. But his strength, footballing ability and reading of the game make him a huge asset.

Centre-back – Gerard Pique: Has matured since his Manchester United days into one of the finest centre-backs in the world. He just has to make the team.

Left-back – Marcelo: Another wonderful attacking full-back, Marcelo is sometimes found wanting in defence, but with a team that would have the majority of the ball, he would be a huge asset.

Defensive midfield – Xabi Alonso: It was close between himself and Sergio Busquets, but Alonso’s better passing range gets him a slot in the team.

Centre-midfield – Xavi: Quite simply, along with Iniesta, the best central midfield player in world football.

Centre-midfield – Andres Iniesta: The Spanish genius is an easy pick – the complete midfielder.

Centre-midfield – Cesc Fabregas: His 8 goals in 12 La Liga games this season has proved his worth to the side. He has adapted effortlessly into La Liga.

Forward – Cristiano Ronaldo: The Portuguese master has scored a stunning 108 goals in 111 games since his move to Spain and along with Messi, is comfortably the best player in the world.

Forward – Lionel Messi: The best player in world football. A record of 207 goals in 294 games at the top level, not bad for a player who isn’t technically a striker. 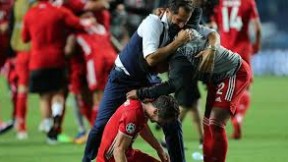 In a recent interview with Sky Sports as part of their ‘At home with’ series, Watkins himself admitted that he didn’t have the easiest journey, putting the challenges down to lack of hard work. “Coming through as a young lad, I felt like I was a first-team player even though I wasn’t and I think a lot of young lads…
Jürgen Klopp agrees new contract until 2024

We have some news for you. Well, it is not exactly news since we know a lot of people must have been looking forward to these playoffs. It is with great pleasure that we also look forward to how these playoffs will lead to the World Series where the final standing teams will battle it…