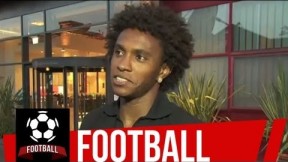 Chelsea’s new midfielder, Willian shared his though about Chelsea and upcoming target, stating that he is keen on getting a place in Brazilian national team for the upcoming World Cup 2014. Speaking about his first impression in London, the Brazilian claims that he is currently enjoying the city and is looking forward to have a special season with The Blues.

The ex-Shakhtar Donetsk player also stated that playing with Chelsea is one of his dream, not to mention the fact that Jose Mourinho is also managing the club from this season. Willian will be looking to fight for regular place with the Blues as that should help him in getting that national team call- up.