Spurs Confident Ahead of Chelsea Clash in League Cup 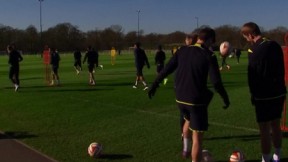 Suffering a disappointing exit from Europa League after being defeated by Fiorentina on Thursday, Tottenham Hotspur must get themselves ready for another tough battle on Sunday as they meet Chelsea in Carling Cup final.

Although it’s only three days after experiencing that bitter exit, Spurs’ boss, Mauricio Pochettino insist that his players are confident ahead of their clash against Jose Mourinho’s men.

Pochettino stated that both teams know each others very well, so there’s not much of surprise being expected by the tactician from his opponent.

Although it will be a tough battle, but Spurs are prepare to give their all as their boss revealed that they’re not targeting anything else aside from winning on that tie.