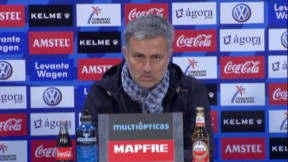 Real Madrid continue their winning run in La Liga after picking up a 2-1 victory over Levante on Sunday. After the match, Madrid tactician Jose Mourinho admitted that it was far from an easy task for his team as they have to fight hard in getting all three points.

The Portuguese revealed that they even have to switch their formation in order to handle the difficult situation Levante were causing.

Mourinho was very pleased with Madrid’s spirit as it gave them a massive victory, an important one for the tactician also since it was his first victory away to Levante.