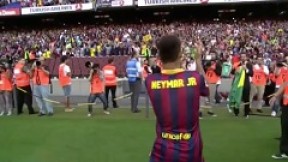 The January transfer window has officially started and European top clubs starting to work on getting players who can help them going through the second part of season.

English side, Manchester United are reportedly being one of the top sides that are working hard in improving their squad this winter with rumors once again linking them with Barcelona star, Neymar.

Although having their bid rejected last summer, Man United apparently are ready to pay up the Brazilian star’s release clause which worth 190 million Euro.

If that rumors are true, the final decision will be solely on Neymar hands, but it’s very unlikely that such massive transfer can happen in January.

Aside from the former Santos man, United are also rumored to continue their interest on Everton young defender, John Stones.