Man United Back On Track After Big Win Over Leicester 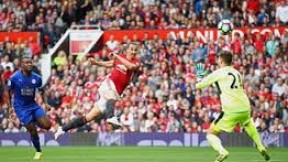 Manchester United ended their back to back league defeat as they trashed Premier League defending champion, Leicester City, 4-1 at Old Trafford.

Coming off a defeat from Watford last weekend, Man United looking sharp as they took 4-0 lead in the first 45 minutes with goals from Chris Smalling, Juan Mata, Marcus Rashford and their 100 million man, Paul Pogba.

Leicester themselves only managed to pull one goal back through Demarai Gray midway into the second half, a goal that doesn’t mean much for Claudio Ranieri’s men.

That victory was a strong statement from Jose Mourinho as he has been receiving several critics recently following their poor results.

However, the absence of Wayne Rooney from Man United’s starting line up sparks further questions on whether Mourinho will continue to left the England international for upcoming games.