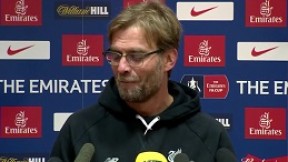 Liverpool can temporarily forget about their disappointing league defeat from Manchester United as on midweek they made it through into the next round of FA Cup after eliminating Exeter.

Drawing their initial meeting, Liverpool went on to win that replay match 3-0, a result that brought some joy for Klopp following his disappointment over their weekend defeat.

After the game, Klopp noted to his players how important scoring goals mean as it can easily change how things are going.

That’s why the tactician is keen on seeing his side being able to score goals more continuously in games as it pretty much decides any tight game situation.