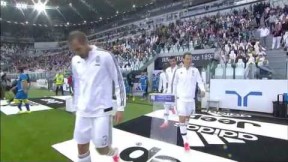 Serie A defending champion, Juventus had an abysmal start into the new season, losing all two of their league fixtures so far, a situation which is rare for the Bianconeri.

Despite that poor start, The Old Lady remain confident though that they can turn it around as head coach Massimiliano Allegri believes that after the current international break, his side can get things right again.

Meanwhile, goal keeper, Gianluigi Buffon stated that his team must not look to make any excuses for their difficult start, albeit admitting losing important players such as Andrea Pirlo, Carlos Tevez and Arturo Vidal are not easy to cope with.

Nevertheless, Buffon is hoping his team can continue to improve, especially in not making too many passing mistakes which happened a lot against AS Roma.