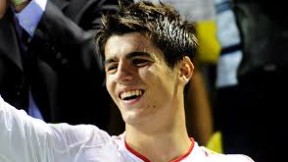 The young striker was bought in a deal worth 20 million Euro, which Juve will apparently pay in three installment and there’s also a buy back clause being set up for Madrid with a maximum fee placed at 30 million Euro.

Morata himself is delighted to have completed his signing with the Turin giant stating that Juve’s strong interest on him was what convinced the Spaniard in accepting their offer.

It will be interesting indeed seeing how Morata will be deployed by Juve’s new boss, Massimiliano Allegri, considering the Bianconeri still have the likes of Carlos Teves along with Fernando Llorente who were the two main strikers last season.

The21-year-old surely keen on getting regular playing time with Juventus, so there will be another battle for position going on for him to get that regular spot under Allegri’s reign.