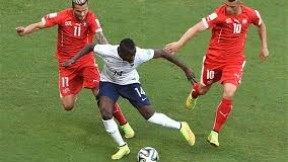 France finally fulfilled their ambition in finishing top of their Euro 2016 group after picking up a goalless draw against Switzerland on Sunday.

Les Blues changed several players for that game, though Didier Deschamps still put on a very strong squad in hope to beat their opponent.

However, Swiss were also determined in grabbing maximum points, creating a tight encounter between those two teams.

Despite creating several good chances, neither teams were able to finish any of their goal scoring opportunities until the final whistle was blown.

That result was enough for both teams to get themselves into the next stage as Les Blues finishing first, while Swiss follow in second seat.