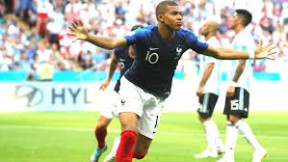 The knock out stage of FIFA World Cup 2018 started in the most exciting fashion as France made their way into quarter finals round after eliminating Argentina in thrilling fashion.

Both teams looked rather careful early as neither were keen on making any mistakes, with Argentina having more possession while Les Blues trying to catch them on the break.

Didier Deschamps’ tactic seemingly working better as it was France that got themselves in front after 13 minutes through Antoine Griezmann’s spot kick after Kylian Mbappe was fouled inside the penalty area.

Argentina able to react well though after going down as they pulled level just before half time break with a lovely long range effort from Angel di Maria.

In the second half, both sides were determined in getting that winning goal and it looked like it’s Albiceleste’s turn to get the upper hand as they made it 2-1 after Lionel Messi’s shot was deflected by Gabriel Mercado.

Les Blues also managed to react well after going down as it took them only few minutes before getting back on level terms with a stunner from Benjamin Pavard, who scored on 57 minutes.

From that moment on, it was all France as they added two more goals, both scored by Mbappe on 64 and 68 minutes.

The match was looking comfortable for Deschamps’ men, but his decision in taking off both Griezmann along with Mbappe forced them to defend more and eventually conceding a late third goal from Sergio Aguero in stoppage time.

Not much time left after that consolation goal as France manage to hold down their slender lead until the final whistle was blown.