Drogba Set for Italian Job Instead of Chelsea Return 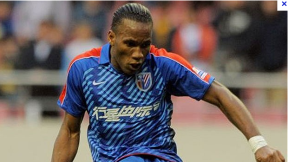 Shanghai Shenhua’s star signing, Didier Drogba, may have been spending sometime training with Chelsea recently but apparently the Ivory Coast striker isn’t going to make a return for the Blues during the Chinese Super League season break.

Latest reports suggested that instead of returning to the Blues, Drogba is set for a January loan towards Italian giant, Juventus. The Bianconeri have been looking for a quality center forward to boost their Scudetto and Champions League bid this season and they believe that Drogba would solve their problems up front.

Another target that Juventus are also eyeing is Fernando Llorente from Athletic Bilbao.

Symptoms That You Should Stop Playing Slots