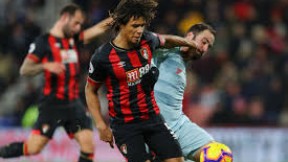 Maurizio Sarri’s men were in a confident mood ahead of their midweek tie and started things in a positive fashion.

Failing to break down the home team’s defense during the first 45 minutes turned out costly for The Blues.

Soon after the restart, Eddie Howe’s side were able to break the dead lock through Joshua King’s effort.

That early second half goal forced Chelsea to push forward in search for an equalizing goal, but leaving themselves opened defensively.

A very disappointing result for Sarri’s team as that result puts them dropping to fifth place, level on points with Arsenal at fourth but Gunners have better goal difference.

In another tie, league leader, Liverpool only managed to extend their lead into five points over Manchester City at second place.

The Reds were tipped to run away with seven points lead this midweek after City’s shock defeat over Newcastle United.

However, Jurgen Klopp’s men failed to fully capitalize as they were held into a 1-1 draw by Leicester City.

Liverpool got themselves ahead very early through Sadio Mane’s third minute goal, but Harry Maguire’s equalizer just before half time break canceled things out.