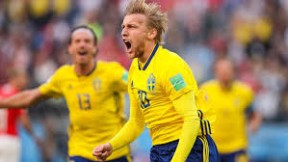 The final day of FIFA World Cup 2018 last 16 was less goal frenzy compared to the previous day as four teams involved were playing rather cautious and tight.

There were only three goals in total scored on that fourth day and from all of them, it seems like Yerri Mina’s late header for Colombia deserved that top spot.

Although it was a heading from set pieces, but that goal arrived in such critical moment as Los Cafeteros were able to draw level before the final 90 minutes mark, giving that a shot in winning via extra time and penalty shoot out.

Although Colombia eventually lose out on penalties, but the moment that Mina scored his header, it was truly another special moment during this already exciting World Cup tournament.

The defender was towering over everyone else, before heading it downward with such strong power that the high bounce couldn’t be stop by any English players.

It wasn’t the Barcelona player’s only goal as he already two more headers in previous matches, making his total tally into three, which all came from similar process.

Other two goals scored on that fourth day of last 16 was Emil Forsberg deflected winner for Sweden against Swiss and Harry Kane’s penalty which gave Three Lions that temporary 1-0 lead over Colombia.