Allegri Not Ensuring Ronaldo Will Always Start for Juventus 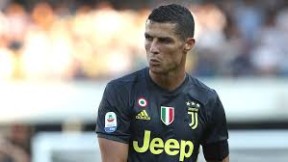 Arriving in a 100 million plus transfer from Real Madrid and having an extremely high wage at Juventus doesn’t mean that Cristiano Ronaldo will always be starting for the Italian giant.

That situation was stated by the Old Lady’s boss, Massimiliano Allegri in a recent news conference saying that idea that CR7 won’t ever see the bench in Turin is a wrong assumption.

However, that rule is something  that the tactician gives out to every Juve players, especially starting from next month when they will start playing mid week games due to Champions League commitment.

Nevertheless, Allegri stated that CR7 always put himself on contention and just simply raising the bar at the club with his quality and work ethic which the star player shown everyday.

Despite saying that Ronaldo might not always start, it might be unlikely to see the Portuguese international seeing the bench unless it’s for resting or something that he himself has agreed on.

Being one of the best players in this last decade, Cristiano certainly is someone who is not just important on the pitch, but also someone who attract tons of football lovers attention.

His arrival to Juve this summer was more than a surprise, which certainly provided something more than just technical qualities for the Turin giant.