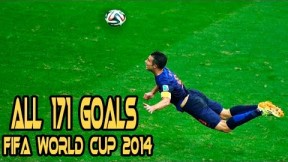 Gearing up for an important football tournament in Euro 2016, it should be interesting to check out the latest major competition, which is World Cup 2014.

The World Cup winner, Germany will also be one of the main favorites to win the upcoming 2016 Euro and fans can remember how good they were two years ago with the goals they scored.

Obviously, many top players got their name in that 2014 World Cup, but does the likes of Lionel Messi, Cristiano Ronaldo, Thomas Muller, Neymar all came up with the best goals? that’s something that can be viewed on this clip.

Before getting all caught up with the upcoming Euro 2016, let’s once again refresh our memory over the top teams latest performances in World Cup 2014, especially those that will also participate in France.