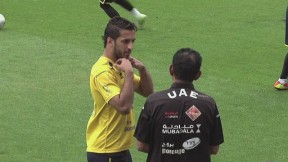 United Arab Emirates head coach Adnan Al Taliani admitted that his side will be facing a difficult task on their upcoming Asian World Cup 2014 qualifier against Uzbekistan, but  Al Taliani remains optimistic with his team’s chances.

Speaking to the media ahead of that encounter, Al Taliani stated that Uzbekistan are one of the top sides in Asia at the moment, so facing them will a tough task for UAE, but the tactician believes his players have the ability to pull off an important victory.

Moreover, Al Taliani also said at all of his 23 players are ready to play in that match, though they will be missing Omar Abdul Rahman, but the head coach is confident with his squad’s ability.