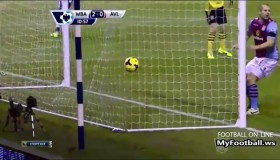 West Bromwich Albion failed to pick up all three points from their latest home fixture on Monday as they were held into a thrilling draw by Aston Villa. Looking motivated after snatching a point from Chelsea in previous weekend, West Brom were putting on an aggressive display against their visitor.

The home side positive start earned an early reward when Shane Long put his team ahead after just three minutes of play. That early strike gave more confidence for West Brom as they kept on moving forward in search for more, which they eventually found within just few minutes later as Long completed his brace by netting home the second goal on 11 minutes.

Unfortunately, that domination fell short after the break as Aston Villa bounced back heavily, starting with Karim El-Ahmadi's effort on 67 minutes. Shortly afterwards, the visitor completed their comeback as Ashley Westwood grabbed the equalizing goal on 76 minutes. No more goals were scored after that as the match ended in a 2-2 draw, much to West Brom disappointment.