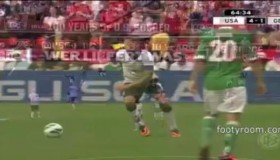 USA 4-3 Germany highlights: USA national team picked up a positive result on their latest international friendly fixture as they defeated European power house, Germany in Washington this past weekend.

Facing a rather incomplete, German side USA didn't waste no time in cementing their domination as they managed to get themselves ahead after 13 minutes through Jozy Altidore's strike. A ridiculous howler from the visiting side's keeper, Marc-Andre ter Stegen gave their opponent another goal on 16 minutes, closing the first 45 minutes with a comfortable two goals lead for Jurgen Klinsmann's men.

In the second half, German side managed to pull a goal back on 52 minutes from Heiko Westermann's effort, but two excellent goals from Clint Dempsey on 60 and 64 minutes simply put USA back in control. Despite not playing their best squad, Joachi Loew's team were not keen on giving up easily as they did managed to make things interesting by netting two more goals, from Max Kruse on 79 minutes and Julian Draxler two minutes later.