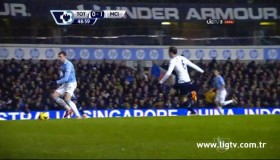 Manchester City's attempt in pushing for that top spot of English Premier League table set to face a difficult test this Wednesday, January 29 as they face an in-form Tottenham Hotspur side at White Hart Lane. Under Tim Sherwood's reign, Spurs have been picking up positive results in the league and they're very keen on keeping that run going, despite having to face strong Man City side this midweek.

Similar target also being brought by City as they're also eager to keep their recent winning run going this Wednesday, though beating Spurs at White Hart Lane won't be an easy task. However, having most of their important players available, surely helps Manuel Pellegrini in setting up his best possible tactic in snatching all three points in that big match.

City eventually got themselves into the top of Premier League after demolishing Spurs in that midweek big match battle which saw Manuel Pellegrini's men scoring for fun once again. The away side got them in front after 15 minutes of play through their star man, Sergio Aguero which lasted until half time break. In the second period, City's machine continue as they added four more goals through Yaya Toure's spot kick on 51 minutes, Edin Dzeko two minutes later, Stevan Jovetic (78) and Vincent Kompany just a minute before the final 90. The home side themselves were only able to snatch one through Etienne Capoue on 59 minutes.