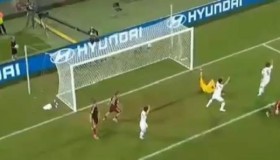 Russia and Korea failed to grab three points on their World Cup 2014 opening fixture as both teams shared a point on their battle.

Knowing that the group favorite Belgium had already won their match, both Rusia and Korea were pushing hard in search for victory.

The European side looked slightly dominant, but Korea were far from an easy opponent as the Asian giant put on a solid defensive display and fast counter attacking play.

After a goalless first 45 minutes, it was Korea that got themselves in front thanks to a howler from goal keeper Igor Akinfeev.

The experienced goalie seemed to misjudge the shot from Keun-Ho Lee, which should have been catch easily.

Russia reacted well though after going down as they eventually draw level through Alexander Kerzhakov's strike on 74 minutes.

No more goals were scored afterwards as both teams are sharing a point ahead of their upcoming group games.