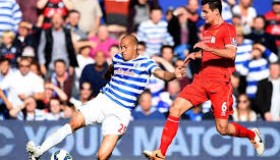 Liverpool earned themselves a precious three points this past weekend after winning a hard fought battle against Queens Park Rangers.

Both sides are hungry for three points as they put on an aggressive attempt since kick off, but none were able to find any break through during the first 45 minutes.

After a goalless first half, Liverpool finally got their luck as they went one goal ahead thanks to an own goal from Richard Dunne on 67 minutes.

QPR managed to draw level though with an effort from Eduardo Vargas three minutes before the final 90.

The match turned to be a thrilling one as Brendan Rodgers men regained their lead on the 90th minute mark from Philippe Coutinho's goal, but two minutes later, it was back on level term as Vargas grabbed his second.

Luck was simply going into Liverpool's way though as deep in that stoppage time they picked up another own goal, this time from Steven Caulker to make it 3-2.