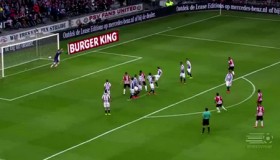 PSV Eindhoven secured the Dutch Eredivisie title after grabbing a big home win over Heerenveen this past weekend.

Having the opportunity to ensure their league title after six years of drought, PSV immediately step on the gas as they went one goal up after just three minutes, through Luuk de Jong.

The home team got themselves into a much comfortable situation when Memphis Depay netted home his side's second on 23 minutes.

Heerenven still put on a fight though as they were able to pull one goal back on 27 minutes trough Joey van den Berg.

The home side regained their two goals margin though when de Jong completed his second in that game four minutes from time.

After the break, PSV still maintaining their attacking approach as they sealed all three points with a fourth goal scored by Luciano Narsigh.

That win ensured the home team's league title as their point can't be surpassed anymore by runners up Ajax Amsterdam in the remaining matches.