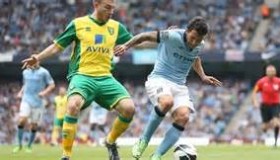 Manchester City Vs Norwich City Highlights:Norwich defeated Manchester City with a scoreboard of 2-3 at the Etihad Stadium during the last match of this season of the Premier League.

‘’The Citizens’’ finished the season in a negative manner as they failed on stopping their rivals Manchester United on getting the title and not only that but also being eliminated from the FA Cup by losing against Wigan.

The first few minutes of the game were fairly entertaining with great moments on scoring arriving for both teams but Norwich did demonstrate much more ambition on snatching the lead.

This ambition and determination that arrived from the players of Norwich was evidenced by the opening goal from Anthony Pilkington when he managed to score after 26 minutes. Although Manchester City responded through Rodwell.

The game marched on with more goals being scored from both teams, Norwich turned the scoreboard 1-2 in the 2nd half but once again City equalized with Rodwell.

Norwich gave it their all and still remained being the better team with the 3rd and last goal that edged the victory and all 3 points for them.

Introduction to the Latest CCIE DC Version in 2020

3 Important Things to Know About the 2021/22 Premier League

Where to, Leo? Messi’s Contract with Barça Expires Today