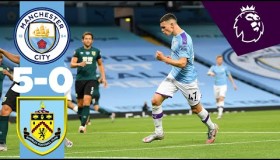 "Foden stood out as the best player on the pitch," said Pat Nevin.
"He had everything about his game - good energy and runs with the ball, but also the eye of a pass which all City players have.
"As an outsider, I would build my team around him, not just City but England too. If it was Spain, they would make him the core of the team early on. I watch Chelsea who have a lot of good young players, but Foden is extraordinary and has the vision that others don't."