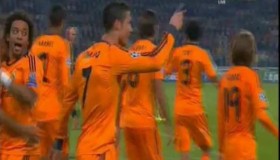 Real Madrid are inching closer to secure their passage into the next stage of UEFA Champions League despite only taking home a point from their latest group game against Juventus on Tuesday. Eager to keep their 100% record going, Los Blancos started strongly on that midweek encounter, but they were facing a much spirited performance by the Turin giant as Antonio Conte's men were not keen on losing another point at home.

Juve's strong determination was rewarded in the first 45 minutes where they managed to take one goal lead, thanks to Arturo Vidal's spot kick on 41 minutes, which can't be saved by Iker Casillas. Madrid were not done and dusted though with that goal as they bounced back early after the re-start when Cristiano Ronaldo leveling things on 52 minutes, capitalizing on a defensive error by the home side.

Los Blancos turned things around shortly after while as their block buster summer signing, Gareth Bale found the net on 60 minutes with a fine left footed drive. Juventus managed to get back on level terms though five minutes later, with an effort from Fernando Llorente, but can't seem to regain their first half lead as that midweek battled ended in 2-2 draw.