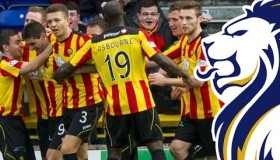 Inverness Caledonian Thistle FC 1-2 Patrick Thistle FC highlights: Inverness ambition to close down their gap at the top of Scottish Premier League standings suffered a blow when they picked up a disappointing home defeat over Patrick Thistle on Sunday.

Playing in front of their home crowd, Inverness were keen on snatching maximum points knowing that current league leader, Celtic only grabbed a point on Saturday. However, the home side found themselves trailing after 20 minutes of play when Kris Doolan puts Patrick Thistle ahead and guide them in grabbing a one goal advantage on that first 45 minutes.

The home side got themselves back on level terms though early in the second period as Gary Warren netting home for Inverness. Things continue to get interesting with both teams eager to snatch that all important winning goal and apparently lady luck was smiling for Patrick Thistle on that weekend as they regained their lead with another effort from Doolan on 83 minutes.