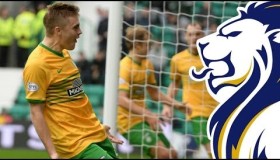 Hibernian FC 1-1 Glasgow Celtic highlights: Celtic's ambition in extending their lead at the top of current Scottish Premier League standings suffered a short half when they were held into a draw by Hibernian this past weekend.

Having Champions League fixture bothering their mind, Celtic seemingly looking keen on finishing things off as soon as possible, so they can set their focus for upcoming encounter. This lack of concentration cost them early in that encounter as Hibernian managed to get themselves in front with an effort from Paul Heffernan on 18 minutes. That lead lasted until half time break as the away side failed to pick themselves up an snatch an equalizing goal during that first 45 minutes.

After the break, Celtic upped their pressure as they were not keen on tasting a disappointing league defeat against their opponent. The visitor's aggressive approach was finally paying off when they managed to get back on level terms through James Forrest's effort on 77 minutes. Unfortunately, they can't grab another goal which will seal all three points and were forced to settle for a point on that weekend encounter.