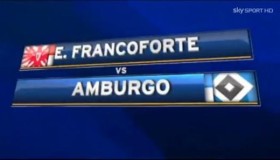 Eintracht Frankfurt 2-2 Hamburger SV highlights: Hamburg continue to struggle in the current Bundesliga standings as they still sitting just in front of relegation zone after only grabbing a point from their latest fixture against Eintracht Frankfurt.

Both teams are looking really eager in grabbing maximum points, trigger an exciting battle right from kick off. The home side did made a positive start on that encounter as they got themselves in front through Johannes Flum on 31 minutes. However, that lead was wiped out as Pierre Lassoga leveling the score just before half time break.

Frankfurt regained their advantage on 54 minutes through Marco Russ' effort, but that lead was canceled out again as Marcell Jansen leveling the score four minutes from time, forcing that match to end in a 2-2 draw.