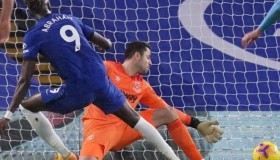 "Any small decisions did not go for us; the flow always went in Chelsea's favour tonight.

"The players played really well. This was our biggest test so far this season. For the majority of it we played very well, but we didn't do enough where it matters: the boxes."
"We'd dropped off slightly and it was important in this game we came back," said Chelsea boss Frank Lampard. "There were loads of things for the team to show their character - we want more."

An ankle injury to left-back Ben Chilwell, which saw him come off early in the game, was a minor blemish on the evening for Lampard, who also has right-back Reece James out with a knee problem.

"We hope both their injuries are not that bad and they will be in and around it for those Christmas fixtures," he said.