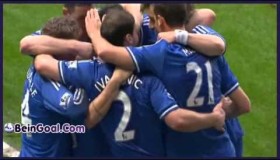 Chelsea making their way into the next stage of FA Cup after successfully snatching an important home victory over fellow Premier League side, Stoke City this weekend. The home looking serious in ensuring their place into the next stage of that competition as they immediately setting an attacking display straight from kick off and that positive approach was rewarded when Oscar puts them ahead on 27 minutes.

Both teams continue to push forward after the break, but despite creating several chances, no more goals were scored on that period as that match ended in a slender victory for Jose Mourinho's men. This victory means a lot in terms of mental level as The Blues keeping their recent positive run going as important games are coming up for them in the coming weeks.