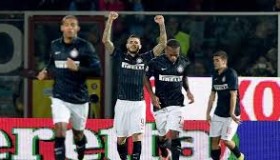 Failing to win their last few matches, Inter are very determined to make things right on the weekend.

It was not an easy task though for Inter to break down their opponent's defense, but after 32 minutes, Nerazzurri finally broke the dead lock with a penalty goal from Mauro Icardi.

That spot kick also resulted in a sending off for Cesena's goalie, Nicola Leali, forcing the home side to play with 10 men.

Despite facing a depleted opponent, Inter can't seem to extend their lead, but that slender lead was more than enough for them to end their recent bad streak.