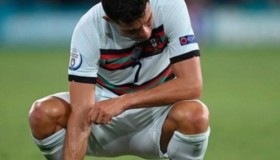 "As a coach I couldn't be prouder," said Martinez. "We played against the best team in Europe in 'knowing how to win'. It was the biggest test there is."
Belgian football journalist Kristof Terreur told BBC Radio 5 Live: "We have been number one for 1,000 days but we haven't won anything. We have to deliver now. It is now or never for this generation.

"The real feeling I had in Russia [at the 2018 World Cup] that we were going to do it, I don't feel that now. This is tough.

"But we have winners in every position now and they have people around them who are winners. [Belgium coach] Thierry Henry, for example, was a winner and he has helped Romelu Lukaku become a winner."

Former England winger Chris Waddle added: "Looking at this Belgium team on paper, if they don't win this tournament there is something wrong.
"They have quality everywhere. I would not want to play Belgium whoever I was. Other teams looking at this draw will not want Belgium.
"Belgium will never have a better chance of winning a tournament than this.

Where to, Leo? Messi’s Contract with Barça Expires Today

Which Team has the best chance to win Euro 2020?

Euros 2020: England Players To Watch Out For

England Premier League Brings the Socceroos to You

Are these players the next gems to emerge from the Championship?

Why Does the English Premier League Work?