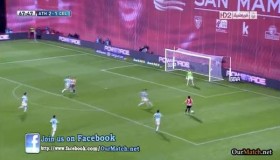 The host didn't have the best of start though as they found themselves trailing on 14 minutes through Charles' goal. However, that early strike triggered positive response from Bilbao as they managed to draw level withing four minutes later through San Jose. Things turned into the home side's favor when Iraola puts them ahead on 61 minutes and seven minutes later, Benat extented their lead to 3-1. Things got interesting again when Celta pulled one goal back through Santi Mina on 79 minutes, but the host hold on to their slender lead up till the final whistle was blown.