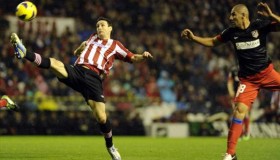 All the goals of the game were scored in the 2nd period of the match.

Atletico Madrid came into the game playing and enjoying the better part of possession as they dominated the opening minutes of the encounter and Diego Costa almost gave his side the lead when he brought down a cross but was denied by Bilbao’s Iraizoz.

Some moments later and it was the turn of Courtois to make a save but it would not make any difference as he did concede a goal some minutes following his fine save. At the 50th minute a corner was whipped in and San Jose connected by jumping and heading it home.

Susaeta and Oscar de Marcos later sealed the victory off as they each scored 1 goal in the last few minutes of the game as they wrapped up what was a surprising victory.