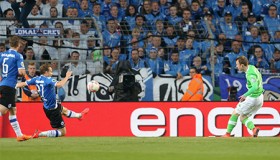 Vfl Wolfsburg made their way into the final of Germany DFB Pokal after successfully eliminating lower rank side Arminia Bielefeld on midweek.

Facing a 3. Liga side, Wolfsburg were looking confident as they immediately took control of proceeding.

The visitor got themselves in front after just eight minutes with a goal from Maximilian Arnold.

Dieter Hecking's men continue their domination as they netted a second goal through Luiz Gustavo on 31 minutes.

After the break, Wolfsburg kept on pushing forward as they added two more goals from Ivan Perisic and another effort from Arnold.

That win gave Gustavo and co a shot at winning something this season though they will face tough challenge from Borussia Dortmund.