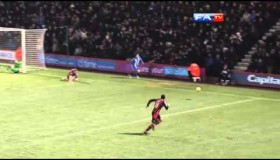 AFC Bournemouth 0-1 Wigan Athletic highlights: Wigan travel to face Bournemouth in the FA Cup third round replay as both sides targeting a ticket into the fourth round of the competition.

Wigan didn't take that long to showcase their premiership class when Mauro Boselli scored a lovely long range goal and put his side in the lead. The host weren't keen on giving up though as they created goal scoring chances that unfortunately were not converted.

The game continue to be interesting after the break as both sides continue searching for goals. Despite creating several chances, none of those teams managed to score until the final whistle and Wigan go through into the next stage.